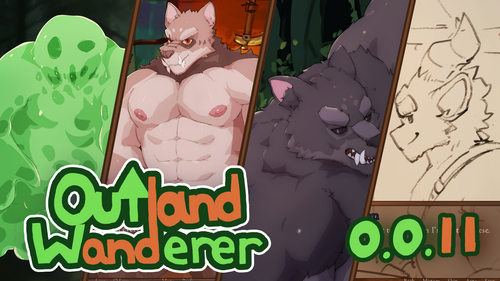 Sorry for the Delay!!

Thanks Magnolia for writing the majority of the update~

- Viscid Stream: A stream populated by slime, and puzzles.

- Hefty Slime: A slime... big enough to pose a challenge

- Malignant Slime: A huge, and dangerous slime... with useful material.

- A Cure for Madness: After taking in Vurro the feral werewolf, Wuldon tries to look for a cure. (Vurro-Saved Path Only)

- The Slime Country: The talk with an expert, has led the lone wolf and his company to a dangerous place. (Vurro-Saved Path Only)

*Quest for the other path will be completed in another update

- The Tailor's Yarn (Part 2): Another task, another story for Rahim to tell.

- Increased All enemy stat due to above bug.

- Slimy bone now drops on Hefty Slime instead of Slime.

- Sokoban Puzzle in Forest Nightwatch has been redesigned to be more accessible.

- Recipe for soft fabric can now be alternatively learned from Mossy Freshwater.

um, help?
i met wuldon in the field, completed the conversation and  met him again at the lake thingy area but then idk what to do anymore

Go near Haskell house (tea lover dragon)where you can get ginger,herb of grace etc...Then you can progress and unlock new dungeon...

How can I activate the new quests?

I talked to Amble, he talks about Wuldon and after that he didn't activate any quests or anything, I tried looking for Wuldon in several places and I can't find him :/

If you can't meet wuldon, maybe it's a bug~ try the newest version and see if it helps!

Where's the new 2 dungeon? I can't find it and how to trigger them?

already save vurro but the quest still not active

how can i get  a cure for madness quest

im stuck in the slime puzzle (the 3rd one. forgotten sanctuary)
anyone can help me?

Then gate will be open :)

nice try man but your help only made it more hard

anyone else not getting the werewolf win cg

Second screen has a exception(Ignorable). Soft fabric doesn't trigger when learning it in Mossy Freshwater. You start with a duplicate of a loincloth, a glitch where if you try to equip or unequip the short sword and necklace in your bedroom on day1 it loops the first day text. If you try to equip or unequip in the shop proper then it kicks you outside the store starting the first conversation with Lothar with your inventory open and duplicating the sword and necklace.

And unable to progress into the first dungeon with General. Becasue of exceptions. Itch not letting me post screenshots.

Hello!!! Sorry for the bugs~

It seems there's a little problem with the short sword and necklace at the beginning of the game. I'll fix that real quick :p

It's fine~ Also it seems dungeons in general are bugged? Both the first and Sandstone(the only ones I've gotten to so far). Was able to get around that by going through v0.0.10. I'm just sorry that I can't show the exceptions that pop up.. >#<;

Just kind of stuck, Where I can access the new dungeon in the Patreon version.

And there is a bug that if you meet Wuldon so many times in Farmland there are gonna be a lot of titles of "The cure for madness" listed in the Journal. I am not sure if there is one more is gonna be listed while you meet Wuldon one more  time.

Ah~ Sorry about that~ Spoiler Below


Try looking for him in Farmland -> River -> Outside Haskell's House

Can anyone give me some help on the Dark Forest Quest?

I can't figure out what i need to do after clearing the cave and defeating the werewolf. The alpha doesn't have any new conversation for me and it doesn't seem like there's anywhere also to go

I actually have the patreon version is the thing though, haha

Hehe~ If you saved the feral werewolf, try looking at the bottom left of Split Trail, it will lead to some new stuff?