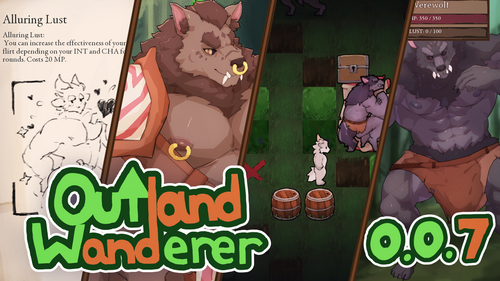 Hey Hey Hey! Another Update for the month!

- Werewolves: Vicious, can inflict bleeding wound on the opponent.

- Seasons of Blossom: Talk to Rahim about the special occassion.

- The wolf at the door: Talk the Lothar about his discovery with the caravan... it might involve the goat tribe.

- Into the Darker Forest: Talk to Furkan and begin the venture into the dark forest

- Potion Order: Talk to Ole about getting some potions from Haskell

- Ale for Sale: Talk to Cane about his new beer recipe and gathering materials for him.

-   Unlock new content/materials by completing Tasks for a number of times! (Not implemented in this patch)

- Hunter's Armor Set: Get the Hat/Armor/Pants in the dark forest

- Complete overhaul in Battle System (No changes in game but... I reduced the code by a lot)

- Fixed Moving during interaction in the dungeon

Alex the polar bear94 days ago

I am absolutely  not happy with the puzzles... but,pretty sure it is satisfactory to many. (Stuck at werewolf one, started with 100% battery on the phone, 42% of battery went down in my trials and errors. It is demotivating.)

I'm sooo sorry about it! I'll lower the difficulty accordingly. Harder puzzles should appear in optional paths from now on and puzzles generally will be more guided~

I am in 0.007 and did I do anything cause that I cannot access the treasure box at the left corner and also not able to cross the two holes part? Because I don't see anyone report that so I guess I may do something really strange... Or that is because I just put the newest version pack in the folder that contains the old one to get my saves?

you can pick the plank back up again.

Yah! It works, thx. I really cannot believe that I did not even try to get it back. And I just found if you are trying to buy a lion charm when you have one form your backpack then the game will just crash down, it is said not reflected, or something like that cuz I am using windows in Chinese so Idk what it should like in English, I don't know if anyone else reports this if so, I am just sorry for bothering xd.

How does one get "canvas"?

Anyone know how to solve tha barrel puzzle in the werewolf forest? I tried it a lot of times but i can't solve it (yes, i know i can push both barrels at once but i don't know how that would help me since this puzzle seems to need a precise answer)

It really is more or less complicated. Some Hint:You need to finish the one below first. The squares that don't touch any walls are important so try to move the barrels around those squares before you slot them in the right place.

wow wouldn't have made it without the hint, i've been trying to solve the top first. Thanks. Almost forgot a bug where i an error message pops up when exiting the golem cave, and if i won against a landshark it freezes at the image of said entrance

the landshark shouldn't be available this patch, I forgot to remove it when I implemented the map guide thing. The newest patch of the build should remove the encounter and fix other bugs :3

Hi, I'm on outland wanderer 0.0.7 and windows 10- it is currently unplayable. I downloaded it for the first time and couldn't get to start (main menu GUI). It was throwing constant errors below.

I continue to click ignore but it builds a lot more errors on top of it. Can you look into this and find out why?

So sorry! I immediately found out the problem as I published it aaaaaa~ I'm uploading the fixed one right now!

Theres a bug everytime i try to change outfits,  so i cant continue the quest with out changing clothes

are you using a save from before v0.0.4? you might need a clean save this time~

Ohhh...hehg i was <3 ill restart it and see if that fixs it. ty for the reply! 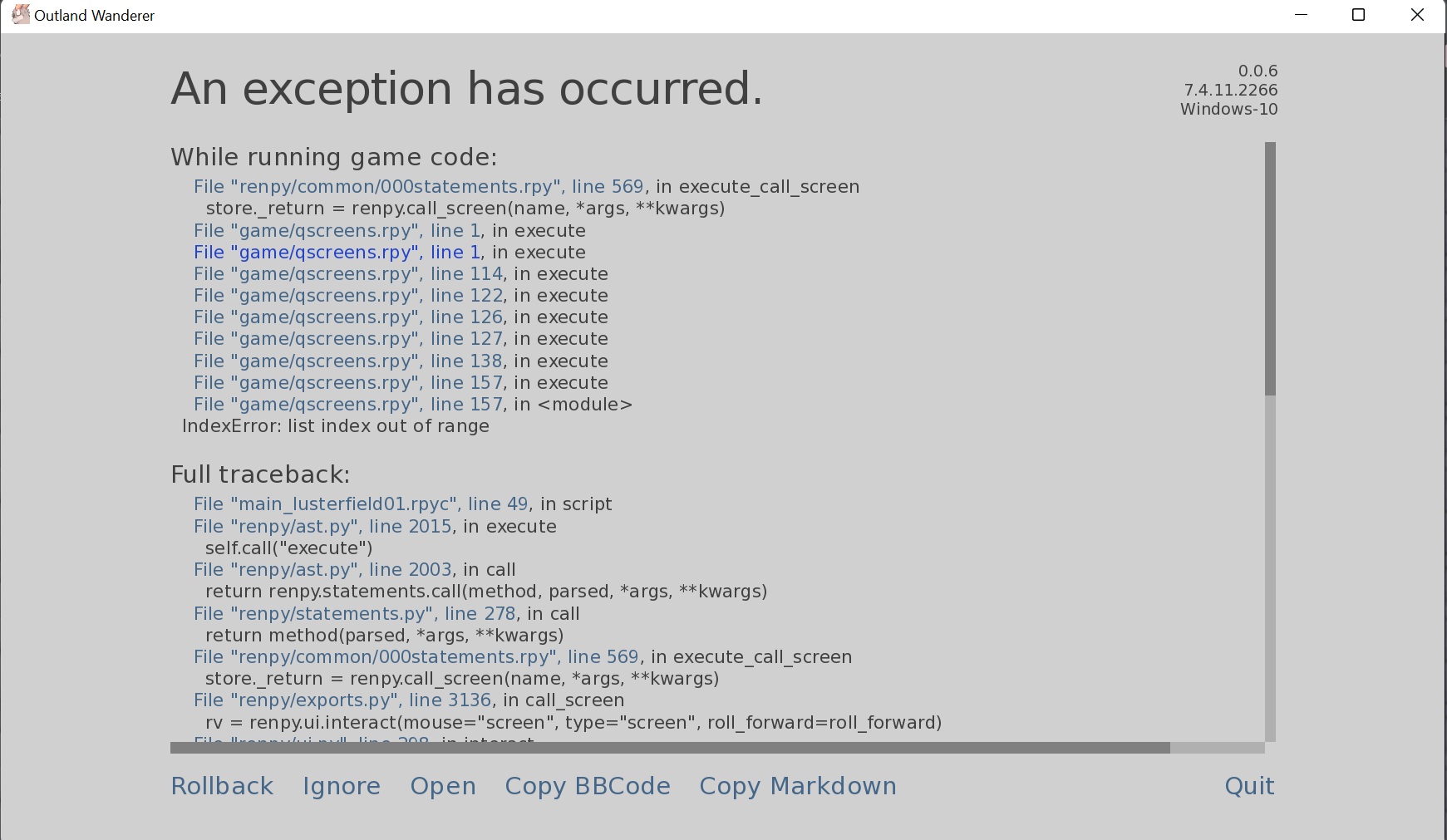 I hope so too~ but you can get the build soon next month :p